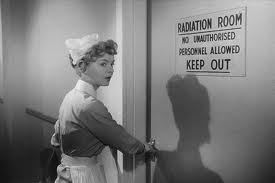 It contains every single cliché known to boxing movies: the nervous novice, the washed-up ex-champ looking for one more shot at the 'big time', the anxious wife who threatens to leave if he doesn't quit, the behind the scenes 'fix', camera close ups of ringsiders screaming for blood and of course the rows of spectators throwing imaginary punches during the fight scenes. (imdb comment on The Square Ring, Ealing 1953)

'Let's have a look at its DNA' she says looking down a microscope. #Prometheus (@AdamRutherford)

A BBC informant tells me the sounds of horses hooves in racing is in fact a generic recording of a buffalo stampede made years ago. (TheLondonSoundSurvey ‏@LondonSounds)

A dysfunctional family whose issues are quickly and easily resolved through token efforts.
The wise fool, an apparently foolish character who possesses greater wisdom than his educated peers. (Wikipedia)

Usually you are palmed off with a few well-rehearsed anecdotes and some meaningless guff about how great it was working with such-and-such and several sentences containing the words “blessed” and “happy” and an affirmation that they are “in a good place right now”. (Observer April 2015 on interviewing actors. It used to be “I’m not happy, but I am content.”)

It's weird, I know, but it is possible to ride a horse not silhouetted against the sky or sea. I've seen it done, by daring specialists. (@melindahaunton on Poldark)

‏ People that carry a torch are never involved in supernatural shenanigans. Kooky folk always drive VW beetles. The really zany ones have yellow convertible ones. #thingsfilmshavetaughtme (Some Bloke in a Hat ‏@toolegs)

Read a quote today saying when a boy finds their secret power, it's a superhero movie. When a girl does, it's a horror film. (Sophie Heawood ‏@heawood)

Movie rule no. 3,946: The bigger the difference in size between the hero and monster, the more wooden the acting. (@‏HamishMThompson)

I really enjoyed Mr Turner. It avoided, for the most part, the 'revelatory moment' trap of art bio-pics. (Charles Holland ‏@ordinarycharles)

It's part of a history of films that start out all Sciencey and then go woo without warning. (@AmyDentata)

This song makes me think suicide. Or... like I lost an important battle and my life is now meaningless so I fall to my knees in the blood-soaked snow and quietly shed a tear as I realize my failure... or something. (Commenter on youtube vid of Japanese song)

An episode packed with cliches, from sunny pastoral love-making in the last days of peace in 1914 to maternal anguish at approaching war and a well-informed populace explaining mitteleuropaeische politics to one another. The dialogue had the colourless articulateness of earnest television drama with no indication of class background. (FT on Passing Bells Nov 2014)

Waiting for the inevitable "You can't prove a thing" "But you
Star Trek computers have audio feedback in a vacuum. (Keith Judge ‏@KeefJudge)

Spaceships make that metallic rumbling screech. (RI And so do oil rigs.)

And computer displays say things like WORKING... in large letters, while making strange beedly-biddle-beep sounds. And in adverts, telephone support people and others wearing headsets have to hold a hand to the earpiece or microphone. (GH in response to observation that people in movies can talk normally with a rock band playing in the background.)

Men in Suits with Guns, Expensive Explosion" and Men Running in Corridor in Front of Flames. (RI on Netflix movies)

You've also got Men in Long Coats with Guns (with different sub-genres
depending on coat colour), Men in Historical Costumes with Guns, and don't forget the ever-popular People Shouting at Each Other for No Apparent Reason. (AG)

Don't forget the ever popular People Chasing Each Other. How many innocent fruit stalls have had to be knocked over in this worthy cause. (JS)

And Men/Women with Bald Heads for No Reason. We need some new cliches... (RI)