Euphemisms about Buildings and Politics (in quotes) 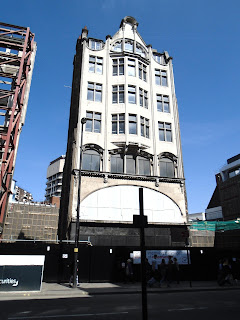 BUILDINGS
What a brilliant euphemism: some parts of Greenwich Park will be "preserved by record" – it means "destroyed"! (ND)

He said an archival record will be made of the crane, and its history will be documented in a heritage interpretation plan. "We are talking about having some of the steel honoured and recognised in various museums." (smh.com.au, Aug 2013 A historic, landmark but crumbling crane in Sydney is being demolished.)

“The Edinburgh Improvement Commission, which was demolishing historical buildings at will.” Fortean Times Jan 2014)

An extension which is "subservient" to these old cottages. (Estate agent on Homes under the Hammer. Better than “in keeping”.)

[The Ship building has been] given a new lease of life as the main Plymouth site for Thrive Hubs, an innovative combination of flexible, inspiring and professional environments for new and growing businesses and entrepreneurs... “a supportive eco-system for entrepreneurs and businesses to work in flexible, inspiring and professional environments” says a spokesman. I think they mean “offices”.

King’s College London will not “demolish” the Strand buildings, but “carefully take them down”. ("The finest baby frogs, dew picked and flown from Iraq, cleansed in finest quality spring water, lightly killed, and then sealed in a succulent Swiss quintuple smooth treble cream milk chocolate envelope and lovingly frosted with glucose." Monty Python. The Strand buildings have been given a stay of execution.)

Boris Johnson insulted objectors to [the Goodsyard] as “bourgeois nimbies”. If arguing that the development was too high, lacked amenities, blocked out light, created wind tunnels and ultimately was at odds with the neighbourhood is “bourgeois nimbyism”, then I’m guilty as charged. (Oliver Bennett Indy April 2015)

sensitive restoration: per British Land, means removing the entire building apart from fragments of the façade. Heartless destruction, in fact.

When a developer says it wants to replicate the "spirit, scale and magnificence" something isn't right. (‏@christianharrup)

Some 50 London estates have been regenerated in the past decade with a net loss of 8,000 social rented homes. (Guardian Feb 2015)

Zoopla warns that a Labour government would “pull the rug out from under the feet of recovery and dampen market confidence” and a Labour win would have a “negative effect” on the housing market. (I think they mean house prices would fall.)

In this whole rush to be 'aspirational' are we allowed to aspire to want to have a fairer society? (@MichaelRosenYes)

The metropolitan elites probably live in "the" otherwise unspecified "Bubble". Oh, it's code for "London" – literally, this just in!

A metropolitan sneer at [working-class] values... Given that the governing metropolitan middle class believes in very little other than power, sex and shopping... (New Statesman review of a book on Blue Labour 2015-05-14)

I used to tell the cabinet: “There’s an enormous distinction in the way people feel about immigration between those who live in London or other big cities and those who live in places like my old constituency of Redditch. I don’t think you understand the cultural and emotional impact of sudden change. This isn’t people being racist, but they see their country changing. (Jacqui Smith in the Guardian, 2015-03-24)


Every time a minister says they are "disappointed" by a court decision or a parliamentary vote then you know the constitution is working. (@JackofKent)

Nicola Sturgeon demands end of £26,000 benefits cap: Labour propped up by the SNP means chaos for Britain – and you’ll pay for it (Online electioneering poster. They mean "taxes will be higher".)

Social security was always a problem for neoliberalism, it protected workers, which made them "inflexible". (Rick B @TenPercent)
‏
What makes me laugh is that I get about 55 leaflets a day from my Tory candidate saying she wants "to take politics out of the classroom". (By which she means setting up a Royal College of Teachers to destroy the NUT.) (@abstex)

Call them what they are: free-enterprise schools. (David Wilson ‏@omnivorist )

Is there anyone who wears a coloured bow tie and isn't a clown who doesn't have a series of tetchy, irritable 'robust' views? (@MarkOneinFour)

Funny how, for the Labour Party, 'Political courage' and 'boldness' is always code for shifting to the right. (Charles Holland ‏@ordinarycharles)
See also "modernising". (‏@WillWiles)

Congratulations to Grant Shapps for "over-firmly denied," possibly the greatest ever euphemism for lying, ever made. (@AdamBienkov)

The culture warriors of Twitter. (Michael Gove, May 2014. He means left-wingers, who have just as much right to use Twitter as rabid Tea Partyers.)


Many more euphemisms and dysphemisms in my ebook Boo & Hooray.