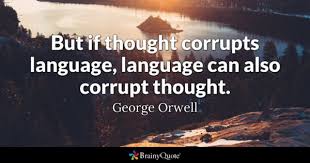 I am firm, you are obstinate, he is a pig-headed fool.
I am righteously indignant, you are annoyed, he is making a fuss over nothing.
I have reconsidered the matter, you have changed your mind, he has gone back on his word.
I have an independent mind, You are eccentric, He is round the twist.
I give confidential press briefings; you leak; he's being charged under section 2A of the Official Secrets Act.
(Bertrand Russell)

"We don’t know what the rules are” is always, always code for “your rules don’t matter to me”. (Charlotte Lydia Riley @lottelydia)

I used to describe him as exciting and dynamic, but now I feel flaky and selfish fits more. (slate.com)

Why even bother using phrases like “the standing of western civilization and it’s classical roots”? By this point, we all know that’s thinly veiled code for “white supremacy.” (@donnazuck)

Now that my retirement is coming up, she has been making noises about “Grandma bonding with the grandbabies,” meaning they want to stop paying for their expensive day care by making me do it for free. (slate.com)

I invested in @VirginCare to help transform the NHS for the better and to improve patient and employee experience. (Richard Branson He means “privatization”.)

God, tweeple today, you're a nasty bunch of moral fascists with no belief in redemption, shades of grey, irony or forgiveness! (Libby Purves on the Toby Young scandal. According to Andrew Lilico, Toby Young is “edgy” and “gauche”. He tweeted about w***ing over pictures of starving children.)

Consult: To perform a con trick that insults the people on the receiving end. (@cowanrob)

Alex Salmond to MP Mhairi Black: I’m sure Taz will take you out to go shopping or something at some point and you’ll find your own style. (Translation: Wear a skirt.)

Time to speak ill of the dead. I was once at a fundraiser dinner with Max Clifford. Having asked me if I was gay, he spent a few minutes being slightly old fashioned (well, massively homophobic). So I asked him “And what do you do?” and he got really cross that he had to explain. (Adam Kay‏ @amateuradam)

Dastyari says the tape of press conference “shocked me” because it didn’t match his recollection. (@PatsKarvelas)
Code for: 'I was shocked that someone recorded what I actually said so it hasn't allowed me to deny it.' (@RodgerShanahan)

Business analyst Emma Sheldrick offers some useful translations. "Manage our stakeholders," she explains, means "placate the people who are asking the intelligent questions about why something is being done"; while "Update our stakeholder matrix" really signifies "we need to take off the people who disagree with the task at hand and find some new ones who agree." (Guardian Nov 2017)

You really have to laugh at the Tories as they say we can have better employment rights, higher environmental standards, improved citizens rights when we leave EU. These Tories have been attacking these rights and standards for years calling them red-tape & burdens on business. (@AngelaRayner)

I have been called ‘bubbly’, ‘peppy’, ‘cheery’, ‘excitable’ by male academics. I do not think I am actually especially any of these things. (Charlotte Lydia Riley‏ @lottelydia Women were also told they “came across as abrupt” and “masculine”.)

“Layers of crude and distorting old overpaints were removed and losses were sensitively and minimally inpainted,” says Christie’s report on Leonardo’s Salvator Mundi. The restorer stabilised the picture, removed most of the later overpaint and fillings, and made cosmetic changes to bring it back closer to Leonardo’s original. (artnewspaper.com)

Those who voted Leave largely didn’t do so for economic reasons. It was a question of values: a desire for steady work, family and community. The majority of people are quietly conservative. Labour won’t win until we understand that. @blue_labour (Family: heterosexual nuclear family. Community: white people. Perhaps.)