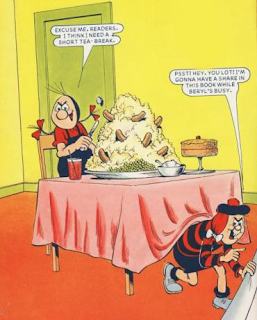 Recent research by Aldi shows many young people haven't heard of bangers and mash, toad in the hole, spotted dick, Scotch egg or black pudding. Why has no hipster opened a British café serving proper British delicacies like this, washed down by tea made from leaves in a metal teapot?

Bangers and Mash
Bake sausages (pork, beef, chicken or vegan) slowly in the oven in a roasting tin until the outsides are dry and charred. Boil peeled potatoes. When cooked, mash with milk and butter. Make a mound out of the mashed potatoes and poke the sausagers (bangers) in at intervals. Serve with tinned "marrowfat" peas a la Beryl the Peril.

Toad in the Hole
Bake sausages in a roasting tin in a hot oven for 15 mins.

Tip flour into bowl, stir in salt. Make a well in the centre and crack the eggs into it. Whisk together, slowly adding the milk.

Remove the tin from the oven and pour in the batter. Return to oven and cook for 30mins.

Spotted Dick
Boiled suet puddings made sense when you cooked in a cauldron over an open fire, but they lived on as steamed puddings until we saw sense. There may be a baked version.

Add egg and a little milk while constantly stirring. Keep adding milk until you can bring the mixture together with your hands into a stiff dough. Work in the currants.

Roll dough into a ball and press into a greased pudding basin. Steam in the oven for 4 hours. Serve with custard.

How to steam a pudding:
Once the pudding is in the basin, firmly tie a cloth over the top with string. Put the basin in a roasting tin filled shallowly with water and put the whole thing in the oven. Keep checking to make sure there's still water in the tin, and topping it up if necessary. (My mother used baco foil instead of a cloth.)

Scotch eggs are hard-boiled eggs covered in sausage-meat and breadcrumbs, and baked. Black pudding is - vegans look away - a sausage made of pig's blood and oats. It is inexplicably popular with foodies who like to combine it with mashed potatoes as "Black Lightning". Scotch eggs are dry but delicious and vegetarian versions are available.

White sauce
Take a piece of butter the size of a walnut and melt it in a saucepan. Sprinkle in some flour and stir till absorbed. Add a splash of milk (from a half-pint) and keep stirring - you may need a hand whisk to remove lumps. When smooth and thickened, add the next dollop of milk and repeat the procedure until you've used all the milk. Let it bubble for about 30 seconds then turn down the heat and simmer for 20 mins, stirring frequently.

This bland substance can be poured over braised celery, braised endive, boiled beetroot, or cooked and diced leeks. You can add grated cheese at the end of the process and stir until melted.

Serve the above vegetable dishes with a slice of cold roast mutton and plain boiled potatoes on the side.

Wartime low-fat version: put the milk in the saucepan. Dissolve 2 tsp of cornflour in a half-cup of water and add. Heat to a simmer and stir until thickened. Add a teaspoon of parmesan if you like.

Fried-egg sandwich
Margarine a couple of slices of thin-sliced white bread. Fry an egg. Insert between the slices, with a spoonful of Branston pickle. Wash down with tea and a No. 6 (cigarette).

Proper cup of tea - learn how to make one here.