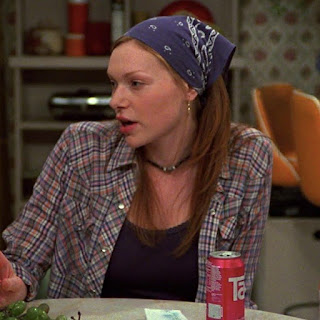 TV costume drama departments often get the period dress of the recent past slightly wrong. They pick up on certain things and ignore others. I've yet to see a drama set in the mid 1970s that captures the near-universal headscarf look worn by young women at the time (tied under the hair at the back, not under the chin like their grannies). I guess this was a street style that never made it into the V&A. (Hugh Pearman)

Leader (normally CIA functionary) tells group of nerds sat around PCs "Listen up people. I need everything on ____. Now!" Nerds get typing without any further discussion or assigning of roles. (@mrpaul2014)

You know that trope, where there's a tussle and the bad guy shoots himself with the gun he was going to shoot the good guy with? Is that even possible? (@daveherman)

Trivia about tonight's The Champions on @TalkingPicsTV: The Night People. Strays from the usual format into Hammer territory. They're all here: the doomed poacher, the white witch, the unfriendly landlord, the creepy butler, the dodgy uranium dealer. (@MarkTrevorOwen)

Proper old school thunder and lightning round here. I feel like we need to read out a will, or bring a monster to life... or something. (@Otto_English)

I am always puzzled by the apparent age of kids’ parents. Freddy is about fifteen. At his age my parents were 36, but his parents look ancient. Belinda Lee, who plays Molly, was 22 at the time, but her mother (Gretchen Franklin) has the appearance of an old age pensioner! Maybe its just their clothes? In American films of the era it's even worse. With grey-haired dowagers parenting 10 year-olds! (Imdb)

John Ford’s The Quiet Man set the standard for big screen paddywhackery (booze, fights, priests and chaste romance) with a template that has been replicated for decades... A soulless sophisticate from the big city, ideally New York, is brought over to Ireland and is instantly transformed by the sights of lush pastures, the liberating influence of the alcohol, and the magnetic allure of the people, who are strictly divided between gormless comedy also-ran imbeciles and simple, attractive (but still basically ignorant) romantic leads. (Kevin Maher, Times on Wild Mountain Thyme, May 2021)

I'd be interested to know whether there is a kind of formula for TV 'drama' that says 'If a woman is abused or killed in episode 1 we can guarantee a good audience and overseas sales ...' (@Dymvue)

The Crown: I know we're supposed to feel empathy with Thatcher when she's so awkward with the royal family - though are we really? - but I'm just pleased to see such a world historical monster suffer. And apparently her neoliberal reforms were driven by her personal insecurities? For me, the ultimate Crown moment was when Prince Phillip realized the astronauts who landed on the moon were nothing compared to him. Every episode has to have that moment where they bask in their superiority. I feel like the Brezhnev-era USSR could have produced a Lenin biopic with more subtlety than The Crown. (@adamkotkso )

Jane Wyman plays a widow who falls in love with Rock Hudson in front of a series of improbably Technicolor sunsets as her children disapprove. It’s over-the-top, lovely, and poignant. (Dear Prudie on All that Heaven Allows)

Another horror film observation: if you buy a house with a Mysterious Locked Room, get a locksmith in. (@volewriter)

Would love to see a gay film one day that isn't some combo of:
I came out to my parents and they disowned me.
We can't be together because I am/will be married to a woman.
1+ people dying of AIDS.
(@adamdavid85)

I try to avoid remakes, reboots, spin-offs, sequels, prequels and re-imaginings. You may guess that I don't watch many new shows! (Michael O’Brien)

What's confusing about The Mandalorian, and the Star Wars universe more generally, is that they're about a fascist Empire that has little to no surveillance tech. All they've got are 1970s CCTVs! And nobody is ever paying attention to them. (@Annaleen)

There is the obligatory night club sequence with the song 'Soho Mambo' (which is as bad as it sounds). (imdb on The Gelignite Gang)

Anytime they try to use a floor show to get a point across, it fails. (imdb)

...and then by bus to a throaty restless obsessed temptress 'thrush' slouched in mortal danger atop a white piano, singing the blues and chain-smoking, somewhere in the long, dark, wet and winding night between Chicago and 'the coast.' (James McCourt)

Wheeler-dealers in sheepskin coats meet in electric-fire-heated prefabs to discuss dirty business as the corpses of murdered associates fall into car crushers and men with crowbars chase each other across piles of rubble and batter each other to death on rickety iron stairwells. (Gareth E. Rees, Unofficial Britain)

I liked Elementary for a couple of seasons, but eventually it got too convoluted and tied with the personal lives of the main characters. (Bruce Richard Gillespie)

Watching one of those important British films where everyone lives lives of terse brutal unloveliness, what's for breakfast you c*nt, its f***ing cornflakes you b*****d. (@robpalkwriter)

When you’re watching a film for the wallpaper you know you’re in trouble. (Jennie Kermode, Eye for Film)

Like when the mark goes back to the con man's office and finds an empty warehouse. (@WordMercenary)

An Art Garfunkel looking poet who walked around quoting poetry and staring into the air. (imdb on Perry Mason)

Ireland could become a fully communist country ruled by a council of seven drag queens and RTE will still have a pic of nuns voting. (@daithigor)

There is a whole set of films where some bad-ass has to escort some not-a-bad-ass somewhere, because some reason, whatever. It's sort of a sub-genre of the generic buddy movie, but more stabby and shooty. (@VictorianLondon)

Everyone has long profound looks at each other – they frequently cry on meeting, or seeing people shot or something. (Kenneth Williams on Dr Zhivago)

Why is it in films and TV programmes, they always get taking a blood pressure reading wrong? (@AwayFromTheKeys)

I struggle to think of anything that has gone beyond four seasons that isn’t either tired or transformed beyond recognition by the time it has reached its stuttering conclusion. (@Glitter_brawl)

I watched 4 SF blockbusters on this flight: Alien: Covenant, Terminator: Dark Fate, The Martian, Ad Astra... the 1st two have the same “I’m-you-you’re-me” robot fight, & the 2nd two have the “loner explores outer space to find his inner self” vibe... (@simon_sellars)

A “fresh take” and a “modern twist” on a classic translates as “we make it quite clear that we in the present denigrate and distance ourselves from the characters’ old-fashioned attitudes, unless we can put modern attitudes into the mouths of characters who lived in a time of slavery, snobbery, racism and women’s oppression”. The Lord forbid we present the story as the author wrote it in 1850 or whenever. Or present 1850s feminism as it actually was. (Georgina Spelvin)

The worst thing about it is a lengthy dream sequence. These things never turn out well. (Amazon commenter on The Chase, 1946)

They're evoking a persistent trope here: the battered, weary soldier for whom death is a relief. (@Delafina777)

There's a rule about comedy that the more the cast is laughing the less funny it is. (@Bloke_On_A_Bike)

I love in movies to show someone is poor they make them live in a normal apartment and take the bus. (@geekylonglegs)

Can anyone explain why Sanditon keeps using Copland's Hoe Down every couple of minutes?? A little Googling and I can't link it to anything but square dance or Irish tunes. They keep using it and it's driving me crazy. How on earth is it English society music? (@LindenG Jane Austen's boys and girls danced "country dances", or set dances, to tunes like those found in Playford's Dancing Master.)

On Peaky Blinders: Whole hours of my life have been wasted watching these people very slowly walking down streets, looking fantastic. In the background, always, somebody is welding. I never know why. (Times Sept 2019)

What was the semiology of braces in 70s TV? I mean wide, wacky braces over a plaid shirt, with jeans rather than hidden under a three-piece suit. Did it signal “gay”? (AB)

Modern film has come to rely more and more upon the frivolous car-chase, the flashy explosion. (imdb)

Wolf of Wall Street: supposedly satirising and condemning a toxic culture but seen by too many as a celebration and justification for that culture with the lead character being adopted as a mascot by the vile. (@ScanlanWithAnA)

Netflix’s series The Last Czars contains a lot of what we in Russia call klyukva (“cranberry”) – deeply stereotypical portraits of Russia, its people, and the circumstances they live in. Peasant life is depicted as a Disneyworld paradise; the capitals are graced with palaces drowning in gold and jewels; the bad Russians (mainly Bolsheviks), drink a lot – and so on... Important figures are oversimplified and cartoonish: ‘a good Romanov democratic adviser’, ‘a bad Romanov autocrat adviser’, ‘a ruthless revolutionary’. (Rbth.com It’s a “sumptuous” series about the Romanovs, full of gratuitous sex scenes, where all the cast swear constantly.)

I would have enjoyed The Wire more had I been able to decipher the dialogue (the writer wanted the audience to “work at it”.)... However, incoherence is often intentional because it is “naturalistic”. (Carol Midgley, Times 2019. Directors, please get actors to face the camera, light them well, go in for a close-up and persuade them to move their faces when they talk.)

The threat of nuclear Armageddon has always had a slightly sterile, clinical feel to it. There will be chrome, and valves, and a megalomaniac, and perhaps some manner of monorail in an underground high-tech bunker, and then there will be a blinding flash of light and everything will be over. (Hugo Rifkind, Times 2019)

I'm sorry to The Sister on ITV, but I just can't be faffed with another drama series where the time jumps around. (@nickw84)

From Line of Duty bingo:
Wad of cash
Secret meeting in a dark tunnel or alley
A really long interview scene
Literally any acronym
“Document X is in your folder”
Peering over the mezzanine
Glaring through an office window