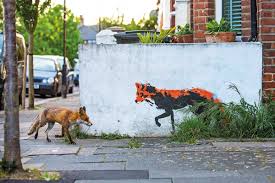 Paraphrased from Healey and Glanvill, The Return of Urban Myths, published in the 80s.

Urban foxes are released into the wild in Wales – from vans marked Islington Council. (Wall art by Stewy.)

A woman took home a speed camera abandoned on the grass verge, thinking it was a microwave oven.

An elderly man drove several miles against the one-way traffic on the motorway before being stopped by cops.

A new motorway was built with an access road that looped you back towards your point of origin. Once on the loop, you could never exit.

Pharmaceutical companies research natural remedies – if found to be effective they are bought up and destroyed.

Shop mirrors are designed to make you look slimmer.

Don’t bother separating your recycling – they mix it all up at the depot.

A headmaster who submitted a sample from the school swimming pool for analysis was told “This horse should be put down immediately”.

The ink for US dollar bills is made from crushed butterfly wings.

MI5 owns the top floors of all tall office buildings.

A copy of every fax is sent to MI5. (These days GCHQ is trawling Twitter and reading our emails. And MI5 used to plant an operative in every mail sorting office, equipped with a kettle for steaming open suspicious letters.)

That kink in the middle of the Channel Tunnel shows where the French calculations were off. The French tell the same story about the Brits. I'm told side tunnels were dug to wall up the boring equipment – it would have been too costly to remove the machinery.

Thinking the job interview had gone pretty well, the candidate exited suavely through one of boardroom’s many identical wood-panelled doors. He spent the rest of the afternoon in the broom cupboard, not daring to emerge during the scheduled string of interviews.