Syndromes We Don't Have a Name For 5 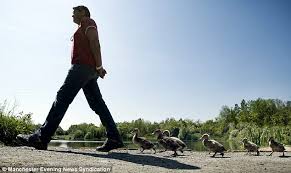 Baby Duck Syndrome: Users believing that the first software product they use is how all software should work from then on. Whatever's familiar, no matter how difficult, is going to be what that user wants to stay with forever. From baby ducks (and other fowl) imprinting on whatever they see first after hatching and considering that object to be their mother, even if it's a human or an inanimate object. (everything2.com)

Vision but no Strategy: This is very good news for all of us who want vision injected into the Brexit process. (Tim Montgomerie @montie)

This, in a nutshell, is the problem with Brexiteers. Every single one of them wants to talk about 'vision'. None wants to address detail. There is absolutely no shortage of vision. They're all ladling it out, because that's an awful lot easier than making sure planes can fly. All they've done is talk about what the glorious future will look like. None wants the boring hard work of actually making it happen. (@mrdavidwhitley)

Days of Future Past: Once upon a time teleworking was the future. (BBC Online)

Daily reminder that capitalism will co-opt counterculture and sell it to you... (Counterpunch, with a pic of an army surplus hoodie covered with “hand-drawn” slogans. Links to marketing hipness, in the process making it mainstream, so there’s nothing left to sell.)


The Poetry Society, which precisely because it was a backwater was a viper’s nest of invidiousness and intrigue. (NYT)

Family dynamics where one person dictates everyone else’s behavior because everyone else is terrified of setting them off on another one of their “adult temper tantrums”. (slate.com Actor Charles Laughton used to throw a huge tantrum early on in a production and then was as nice as pie – but everybody treated him with terrified deference in case he did it again.)

Doubles down on her prejudice when called out. (slate.com)

Most cargo cults in the South Sea died out fairly quickly because no cargo arrived: it was really hard to continue fooling themselves. (David Didau)

The feud consumes their lives and irrevocably damages their careers. (Greatest Mysteries)

I just checked out a new coffee shop. At the register, there's a sign that says there's no wi-fi so that customers "make a friend." It worked! My new friend is a different coffee shop. (@legogradstudent)

Once folk believe one daft thing, they can be encouraged to swallow a different daft thing. (@EUtopean And vice versa. Get a cult member/conspiracy theorist to doubt one thing about their complicated worldview and the whole house of cards comes down.)

“Oh sorry, we wouldn't have tried to bully and intimidate you if we realised you were middle class and articulate." (via Twitter)

Get your foot in the door just as it’s closing.
Take up a fad just as the cool people drop it.

Have long-term plans, then realise the moment has passed.

Plan to jump on a bandwagon, and then realise it left years ago.
As your beauty fades, cling to the remnants of a career.

Crazy Optimism: Urge the restoration of  Brighton’s burned-out pier as the charred skeleton collapses into the stormy waves of the English Channel.

The End of the World Has Been Postponed: Instantly coming up with a reason why the world didn’t end when you said it would, and why it will end on the new date you now put forward. (Rinse, repeat.)

Time for Violin Practice: Tendency of adults to force children to do something difficult, unpleasant and probably pointless, like learning Chinese. Or practising the violin when they have no musical talent and will never even be able to give a decent rendition of Greensleeves. Continue this for about ten years. The child then gives up lessons, puts away the violin and never touches a musical instrument for the rest of its life. The only thing that has been achieved is suffering and time-wasting for the child, but maybe this was the object. It scrapes at the violin, under duress, but at least it isn’t playing computer games.

We're All Doomed: Academic or novelist rants about how some technological innovation (biros, Twitter, word processors, semaphore) is going to destroy novel-writing, letter-writing, conversation, civilisation, life itself etc many years after everyone else has accepted Twitter and it is such a part of people’s lives that nobody notices it any more.

Recency Illusion: Thinking this Thing has never happened before, even if it has happened every year for the past 30.

Civilisation flourishes for 1,000 years in a remote location. Then abruptly the city is deserted and elaborate temples, palaces, sculptures are left to the desert sands/jungle.

The British way: Don't ask for help, when none is offered say "Thank you very much!" sarcastically, then complain, while congratulating yourself on your directness.

The Grass Is Greener: They do these things so much better in…

Hunger Games: Invite people to dinner, or to stay, and never give them quite enough to eat, or make them wait until 10pm.

Complain Brits won't eat free fungi.
Tell them how to find it.
Complain there's no free fungi left because the Brits have eaten it all.

Entire academic department studies the way people’s minds are warped by capitalism and “false consciousness” but no plans are made to do anything about it. The academics' minds are never so warped, of course.

Free Will: Explaining at length that Man has free will – and then letting determinism in again by the back door. Claiming that we don’t have free will and then living as if we did.

Public Sculpture: Amazing persistence of councils in commissioning and erecting ghastly humanoid sculptures that are immediately called “Slag Alice”, “The Tart with the Cart” etc.

Mole Man I: I Impulse to dig amateur tunnels, like the duke who built a ballroom under a lake. Links to the male impulse to do something dangerous, time-consuming and expensive, especially if it involves competitive equipment buying.

Mole Man II: Infiltrate a protest group and incite it to break the law so that you can crush it.

Temporal parochialism: Point out that Ice Age people had “modern minds like our own”.

Tendency of peasants to wear traditional costume with huge starched headdresses and a lot of labour-intensive lace and embroidery (adding value to cheap materials).

Mirror, Mirror: Inability to see that your vast wig makes you look like an alien.

Thinking your friends are more important than they are.

Meek, mild-mannered man who never harms a fly tells you quite seriously that the only solution to the world’s problems is to wipe out 90% of the population, giving detailed plans for infectious plagues, nuking volcanoes etc.

Mean-spiritedness about absolutely anything and everything – especially on social media. (Which has given these people a wider audience and don’t they just love it.)

Sending 100 abusive emails and FB posts to a total stranger.

Policing other people’s inner lives. Particularly large groups of people, like “the young”, or “the masses”.

You break up, but you make sure your ex doesn’t find anyone else by staying in contact, being kind and friendly, lending her books, fixing her washing-machine, feeding her crumbs of affection.

Interrupt and distract someone who is concentrating, or working from home.

Tell atheists what atheism really is, while defining it out of existence.

More here, and the links to the rest.