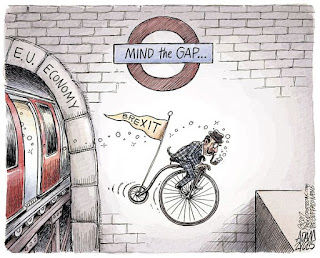 Brits and bureaucrats are depicted wearing bowlers, which faded out circa 1970. Bankers are shown wearing top hats - they ditched the headgear in the 30s. The English character Spalding in Hergé's Flight 714 is tall, thin, red-haired, tweed-suited and sports an RAF moustache of the kind not seen since the war.

An American cartoon shows a balding man in a tweed suit and a trilby hat, blowing bubbles from a Sherlock Holmes pipe, sporting a monocle and a handlebar moustache, riding a penny-farthing with a BREXIT pennant into the void.
A caricature Briton wears a bowler hat, a moustache, and combinations. (2017 Dec 31 And nobody knows how to draw a bowler hat.)

A French paper publishes a cartoon of post-Brexit Britain: A tall thin man with an RAF moustache in a tweed suit and bowler hat reads the Sun in an outside toilet.
There was a French “comedy” series about a humorous Englishman in a bowler hat (Major W. Marmaduke Thompson by Pierre Daninos).

Who wouldn't want to unite and fight in the face of a common top-hat bedecked, welfare-scything enemy? (Huffpost Dec 2012)

Dominic West is amused by the expectations Americans have of anyone with a British accent, eg “fairness, style”. He says that in Finding Dory he and Idris Elba play two British sea lions sitting on a rock “an island in the middle of nowhere, being fiercely aggressive towards any outsiders”. (Times July 26 2016)

Cartoon bureaucrats are shown as men in pinstripe suits and bowler hats, with briefcases, scurrying through an ornate doorway. Pinstripe suits were last seen in the mid-70s. And the bowler-wearing, pinstripe sporting, briefcase carrying bureaucrats of circa 1955 would have worn a raincoat or overcoat outside. (This led to a long argument on Twitter, with people saying “it’s useful shorthand”, and a similar one about bankers in top hats – “Aren’t we allowed to use metaphors?”) 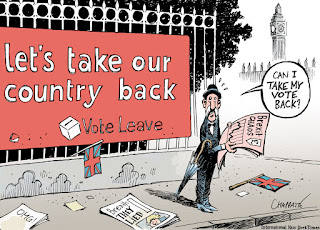 Americans laugh at us for eating fruit cake and having terrible teeth. They sneer at us for saying “an hospital” because they think we’re speaking Dickensian Cockney. (They also think Lord Peter Wimsey dropped his Gs out of solidarity with the workin’ classes, when it was an old-fashioned aristocratic habit.)