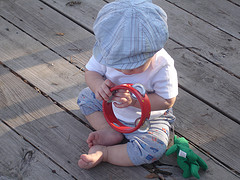 On the 73: Kieran, you’re crying off your pirate makeup! (Actually I think it was “messing up”. )

What do you want for lunch, Phoenix? (Stoke Newington. Or it might have been "Felix".)

In Stoke Newington, mother to child: We're going to have avocado, tomato and honey on toast for lunch! Child: Ooooooh! (Not absolutely sure about the honey.)

Middle-class mother in auction house explaining fig leaves to her children: "It’s a figleaf to cover up the genitals, his willy and balls".


Overheard tonight at dinner - Waiter: Do you have any questions about the menu? Response: Yes, what font is this? (@erinmorgenstern)

On the 236: They’ll only do graffiti on the muriel.

OH in the [New Scientist] office: "It's the industrial revolution, only with spiders!" (sumit paul-choudhury/‏@sumit)

Man in John Lewis fitting room: "I don't mind if it's not in the sale. I'm a lawyer. And bring me a belt." (@DrMatthewSweet )

Carluccio's comes to Dorset: "And I'd like a chocolate fon-dantay," overheard at next table. (Friend BG.)

"Do you know, there are whole swathes of Kentish Town I just wouldn't consider anymore..." (@mwhitfield80 )

People are still making them up:
"I know Alalia can't be invited to every birthday party, but I'm going to phone them and point out she's top of the Mandarin class."
"Can you do a kid's meal with halloumi?" OH in West Didsbury. (@oisinshare)
Walter asked for the walnuts to be taken out of his tabouleh the other day. He's two. (@ChrisMorrish)
"Darling, would you ask the housekeeper to take the celeriac out of the fridge?" #overheardineastdulwich (@PatLongTweets)

Sometimes train staff have a sense of humour:

Guard on train just announced "If you see anything suspicious, anyone smiling, report it to me". Biggest laugh I've heard on commuter train.  (@DirkMaggs)

As the Tube train pulled into Ealing Broadway this evening the driver wished up all a Merry Christmas and a prosperous New Year, then... said "And if you're a Buddhist, and I am, don't come back as a turkey!" (Albertina McNeill/‏@AlbertsCrochet)

Would a Mr Tutankhamen please come to the buffet car where his mummy is waiting for him. (Classic.)