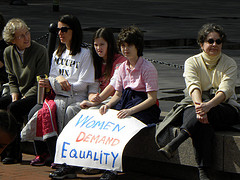 So the future must have arrived. Do we become modern just because time passes? Is there a deadline for legalising equal marriage, ending racial abuse and learning grammar? If by “become modern” people mean “fulfill the liberal agenda”, it doesn’t just happen by itself – we have to do something about it. Guys! It’ll be 2014 soon! And we expect nothing less than gender equality – and hoverboards.

Hungarian Jews are fleeing the country due to anti-Semitism. In 2013? (Feargus O'Sullivan/ ‏@FeargusOSull)

No need for any more tweets like this, thanks. "Women! there are also 365 other days in the year you can ask him to marry you. It's 2012!" (Graham Linehan‏/@Glinner)

We live in the 21st century and must move on. (John Major on equal marriage Dec 2012)

Kevin Prince Boatang (AC Milan) after refusing to play after racial abuse in a friendly in Italy. No one deserves that ish. It's 2013 FFS (Tyrant/‏@patricktyrant)

It's 2013, and I'm still over here wishing that people knew the difference between your and you're. (Madeline Caywood/‏@madcay_20)

"Even ATHEISTS should have their beliefs respected" splutters the Daily Mail. In 2013. Atheists! Whatever next! (Dave Jones/‏@welsh_gas_doc)

I’m sad that it’s 2013 and there are still firsts for women. (Conductor Marin Allsop)

A high school teacher is fired after her partner's name appears in an obituary. It's 2013. Unreal.  (GOP FIB Network/‏@GOPFIB)

It's 2013, if you still think calling someone gay is an insult... You just look ignorant and plain dumb. (Danny. cx ‏/@dannytheteen 10 Apr)

Some days you think it's 2013. Then you read something like this, and your jaw drops, and you wonder (Neil Gaiman/‏@neilhimself 4 Apr It’s the story of Wilcox County’s first integrated prom.)

Georgia Teens Fight for Racially Integrated Prom Because It's 2013, for Chrissakes  (Jezebel/‏@Jezebel 4 Apr)

It's 2013, if you still use the word gay as an adjective to define something as stupid. You are the stupid one. (Richard Ayala/‏@LilRich93 3 Apr)