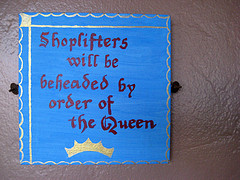 I was researching a role!


Adlène Hicheur claims he wrote the emails [to an al-Qa’eda member] during a “turbulent” time in his life, when he was taking morphine for a back injury. May 2012

I’m not voting because I’ve just had enough of everything, voting never changed anything, I’m not voting for a politician, I want to send Them a message...

Nigella Lawson says she has lost weight because a double bunion operation meant she couldn’t walk to the fridge.

You only say there isn’t a God because “You don't understand the nuance of theological argument.”

Mohammed Amir was “blackmailed” into spot-fixing by manager and agent. He replied to texts about spot-fixing “out of boredom”.

Always fun when someone gets something wrong and then says they did it "to provoke discussion". @matr77

A decade ago, American actress Winona Ryder was convicted of stealing thousands of dollars worth of clothes. In an interview with Vogue magazine a few years later, she blamed her actions on painkillers that she said she had got from a "quack" doctor after breaking her arm a few months earlier. The painkillers, she said, left her in a state of "confusion". bbc.co.uk (I thought she was “researching a role”.)

I didn’t build this illegal 2,250 square foot underground palace - it was my wife! Henry Tang Feb 2012

My dope test was positive because I ate a contaminated steak.

Dr Liam Fox, in his resignation speech, said he’d allowed "distinctions to be blurred between my professional responsibilities and my personal loyalty to a friend". ... Possibly he was inspired by his colleague, Caroline Spelman. In February, after abandoning her plan to privatise Britain’s forests, she said: “It is a good example of how humility is a valuable tool in a politician.” Michael Deacon, Daily Telegraph Jan 2012

“I went outside to top up the electricity meter and my towel slipped off.” flasher, Northants Evening Telegraph Nov 5 2011

Sister Patricia, from the Carmelite Monastery in Baltimore [explaining why prayer didn't always work], says: "A person can be healed in ways we’re not aware of. Maybe their heart wasn't healed in this particular study but... maybe they're meant to be ready for death in a fuller way... that's healing in itself." (This goes with "The real miracle of Lourdes is that so many people repent.")

Philosopher Jeremy Bentham wrote an entire Handbook of Political Fallacies on parliamentary excuses ("We can't possibly do that because..."). Writer Sydney Smith came up with a shorter guide.
This is straight out of the book:

David Burrowes, one of the organisers of the campaign against [gay marriage], told The Independent he is "cautiously optimistic" the proposal will be defeated in the Commons because it would "fracture" the institution of marriage. Mr Burrowes, parliamentary aide to the Cabinet Office minister Oliver Letwin, insisted there is strong opposition to gay marriage across the Conservative Party spectrum. "Many colleagues are worried that it would fundamentally affect how marriage between a man and woman has historically been viewed in this country," he said. "There are strong doubts that we need to go down this path. It would open up a can of worms and a legal minefield about freedom, religion and equalities legislation. Gay marriage is a debate we don't need to have at this stage. It is not an issue people are hammering us on the doorstep to do something about. It is important that there is a reasoned debate around how we view marriage rather than about homosexual rights. It may open up old wounds and put people into the trenches; no one wants that." He denied that dropping the plan would jeopardise Mr Cameron's modernising credentials. "There are many other ways that the Conservatives can show we are a modern party – not least our social justice agenda. This is too important an issue to decide in terms of where it positions our party." Independent January 17, 2012