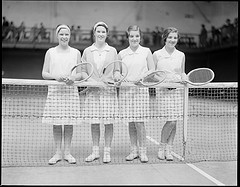 The ball is very much in their court (either it is or it isn’t - and shouldn’t it be “the ball is on their side of the net”?)

"If you deny the existence of God, that proves he exists."

"Lets talk about Augustus Pugin who would have been 200 today" - the splendid Evan Davis on bbcr4 today. Had it not been for what, Evan? @DAaronovitch (And can we retire “who was to become”?)

Stone walls do not a prison make, not iron bars a cage – but, well, they do actually.

“Lose them from learning now and lose them from society forever.” Grace Dent Guardian October 1 2011. This is turning an inclusive term into an exclusive term – “society” consists of us all. The opposite is “we are all shy really” – which means you have to find a new word for people who can't speak in public.

"William Gibson may be a kind of futurist, but his best eyes are for ruin." How many eyes does he have? @ballardian

Live every day as if it was your last. “You couldn’t function in society if you really did that.” Steven Poole The Guardian Feb 2012