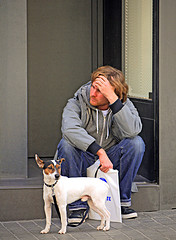 People adopt pets for a variety of reasons. Some simply love animals; for others, pets are a social lubricant, an easy way to meet new people. maisonneuve.org

Next to me a group of young women discuss the flaws of another, absent, young woman. The insistent analysis. It's like high school newsnight. Feb 2012 @DavieGreig

The good thing about science is that it's true whether or not you believe in it. Neil DeGrasse Tyson

The loss of a partner, through death, divorce or separation, can leave a person bereft of confidence and wondering whether they will ever again be able to entertain or meet others socially with ease. Review of Doing It Alone by Elaine Borish and Sheila King Lassman

Being the oldest person in the office is odd. How did it happen? Was I not paying attention? One moment I was one of the kids, going out after work and drinking a lot … The next minute I am quietly responsible … not wanting to go to clubs, even if I could find them without my glasses, and looking forward to an evening self-medicating on Desperate Housewives. Carol Cooke, bbc.co.uk

Sean Stewart selected Quickstart because it advocates [life] coaching after just 30 days of training. After completing the course, he made cold calls to acquaintances, looking for clients, though they have thus far been skeptical (one called him “a fraud”). But Mr. Stewart is undaunted. “The fact is, most people don’t want a coach,” he theorized of his lack of success, following with a classic [Tony] Robbinsian “re-frame”: “What people do want, however, is a solution to their pressing problems.” NYT on life coaches, Feb 2012

For men, marriage has become more optional. They don't need it. The romantic relationship has become more central to both men and women than ever and it's a great source of social worth, of validation. But men use sexual prowess, how many partners they have, to get a sense of worth, and women will want to be loved. So in that respect women are more dependent on men and want exclusivity while men want quantity. Eva Illouz Guardian Feb 12 12