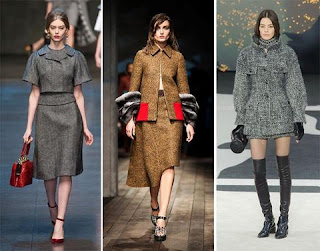 Journalists will write the following articles:

Tweed is shaking off its tweedy image.

I'm a grammar snob, haha! But language has to change. It's those others who are pedants. Here are my pet peeves.

"I tried stand up for the first time but it was definitely research for an article and not a desperate attempt at validation" pieces that many columnists inevitably churn out. (Dean Burnett @garwboy)


This new adaptation is an Agatha Christie for our times: visceral, deliciously dark, and full of grossness, bad language, violence and sex. Instead of a stuffy country house, it takes place in a crack den in Glasgow. It was high time we had a female Poirot!

Journalists will confuse average age at death with average life expectancy at birth. (In the olden days nobody lived beyond 40!)

The writer of a new version of Bleak House will be praised for the way he/she highlights poverty and inequality in Victorian England.


People will say:
I’d leave Facebook but it’s the only way I can stay in touch with my dad, organise my choir, share my holiday snaps or [insert reason here].

It’s time to stop [tweeting, complaining about sexual harassment, using the term “fake news”] because it is actually counter-productive.

What have we become? Entitled, outraged, thin-skinned – apart from me!

We must do something about the [lonely, autistic, single].

Some essential aspect of modern life is the reason why are going to Hell in a handcart. (They hoped it would go away when it first appeared 15 years ago, but now everybody has got one. They have too, but they don't really know how to work it and have to ask their children.)


Snow isn’t snowy enough, young people are young, and everybody does traditions wrong.

And:
They’ll tell us not to politicise something political.

Racists will ask “How is that racist?”

Someone will say that we have too many “things” and should live more simply – in 2018 it was the Pope.

People will say the following as if they were the first person to have the idea: You're the real racist, political correctness is the new oppression, atheism is a religion. (And many more.)

People will explain why that isn’t anti-Semitism, and that isn’t bullying, while claiming to be against all racism and to have an anti-bullying policy.

Middle-class women will moan “Well we would invite single women, but it’s so difficult to find single men for them.” A bright spark will set up bachelorsanonymous.com.

Travel disruption will be referred to as “chaos”, and road or air shutdowns will be termed “hysteria”.

A new hominin species will be discovered.

Various methods will be tried to stop people buying or selling sex. Nobody will explain why this is a bad thing.

Come September, a school will get into the papers by making a ridiculous fuss about some detail of its uniform.

One or two women a week will be killed by their partners and ex-partners.

There will be schemes to empower girls and tell them they can do or be whatever they want. Nobody will do anything about the attitudes that close doors to women.

Waistbands will move nearer the waist but never quite get there, like Zeno's arrow.